Shaikh Ahmad Sirhindi & His Impacts On Muslims’ Society And Politics On The Indian Sub-Continent.

The following article is written by Minahil Mohsin, a student of Sir Syed Kazim Ali. Moreover, the article is written on the same pattern, taught by Sir Kazim to his students, scoring the highest marks in compulsory subjects for years. Therefore, to help thousands of CSS and PMS aspirants, we have uploaded this article so they can understand how to crack a topic or a question, how to write relevantly, what is coherence, and how to include and connect ideas, opinions, and suggestions to score the maximum.

How Much Is English Important For CSS and PMS Aspirants?

Amid the deteriorating condition of the Muslims of the subcontinent, entangled in the nexus of un-Islamic rituals, a God-sent saint, Sheikh Ahmad Sirhindi, appeared on the horizon and overhauled the society morally, religiously, economically, and politically.

✓ Clarified the difference between Islam and other religions

✓ Impacted Akbar’s successors, bringing about the eradication of social evils

Why Do Most Students Fail CSS and PMS Exams?

Amid the deteriorating condition of the Muslims of the subcontinent, entangled in the nexus of un-Islamic rituals, a God-sent figure, Sheikh Ahmad Sirhindi, appeared on the horizon and overhauled the society morally, religiously, economically, and politically. He was a great Sufi scholar and a descendant of Caliph Umar ibn al Khattab. The Sheikh considered himself “more than a Wali – a renovator of religion”. It is to be noted that during the 17th and 18th centuries, the then Muslims of the subcontinent were being lured into ill-customs and unorthodox practices. Prostration before the king was deemed compulsory, and people relied solely on Karamat and jurisprudence rather than following the actual teachings of Islam. To counter these evils, Mujaddid Alif Sani brought a fundamental reform to the situation. He got the un-Islamic laws revoked and the true teachings and practices of the religion implemented. His efforts further strengthened the roots of faith in society by bringing the concept of the Two-Nation Theory. He also had a tremendous political influence on the coming generations of Mughal emperors, reforming the overall socio-political and religious fabric of the subcontinent of the time. In the long run, these efforts of Sheikh Sirhindi greatly impacted the young generations; hence, Islam spread throughout the subcontinent in letter and spirit, as is evident today.

As explained earlier, Sheikh Ahmad Sirhindi grew up in an age when the subcontinent was becoming more and more secular. Islam’s true teachings and practices were vanishing with time, and the unorthodox Sufis’ distorted concept of Wahdat-ul-Wajood was gaining popularity, misleading people into monism. To worsen the condition, Emperor Akbar formed an Ibadat Khana and displaced the Khatib of the chief mosque of Fatehpur, taking charge himself. Not only this, the Emperor brought about an amalgamation of several religions to make governance easier for himself. Akbar’s Din – e – Ilahi – was based on the principle of “Sulh – e – Kul” or “Universal Toleration”. As a result of his actions, a trickle-down effect was seen in the society; as the Emperor and the elite became corrupt, the lower tiers of the society also started degenerating morally and religiously. All in all, the whole Islamic civilization was falling apart, and the teachings of Islam were in great danger in the subcontinent. It would not be wrong to claim that Islam would not have survived in its true essence had it not been for Sheikh Sirhindi fighting against the odds during his era.

“The road to ijtihad (interpretation) was opened for him, and it was established that the Imam (the Emperor) possessed superior wisdom. No obstacle was left in his way. The difference between things, lawful and unlawful, was abolished.

Sheikh Ahmad Sirhindi was primarily a religious scholar. Hence, his teachings were focused on bringing reforms in the religious thought of the then Muslims. For this purpose, he first decided to counter the concept of Wahdat-ul-Wajood with his concept of Wahdat-ul-Shahood. According to the latter, God and man – although related – are not the same entity; God is the Creator and man, His being. Moreover, Sirhindi’s preaching of Monotheism helped neutralize Akbar’s un-Islamic decrees. Adding to it, Sirhindi had a great influence on Jahangir. Thus, the Sheikh slowly yet steadily kept explaining the teachings of Islam to the king, and his efforts bore fruit. This way, many unlawful practices, like inter-religious marriages, were banned. Likewise, many banned Islamic rituals were unbanned; cow slaughter, Azan, jizya, and pilgrimage tax were all re-legitimized. Such was the impact of Sheikh Ahmad Sirhindi on his contemporaries. Moreover, his efforts can be witnessed by how he changed the thoughts of the brainwashed Muslims who were made to rely on jurisprudence and Karamat alone; Sheikh Sirhindi showed the then Muslims the right way of practising Islam with the help of the Quran and Sunnah. To him, mysticism without Shariah was misleading. In a nutshell, Sheikh Ahmad Sirhindi rejuvenated Islam in the Muslim civilization of the subcontinent in such a holistic way that he is remembered as “Mujaddid Alif Sani” – a reformer of the second millennium.

As the true essence of the religion started strengthening its roots among the people, its several influences became apparent in the Muslim society. First, the king – under Sheikh’s influence – started emphasizing the practice of Shariah and Fiqh; practices involving religious innovation (Biddet) ceased, and the Emperor started offering morning prayers. This, in turn, led to the mosques teeming with worshippers who were under Jahangir’s influence. Also, idols were broken, a cow was slaughtered, and a khutba was read at the conquest of the fortress of Kangra. In addition, Sheikh Sirhindi defined and clarified the difference between Islam and Hinduism. This is how he brought forth the two-nation concept – according to which Hindus and Muslims are “two poles of a magnet that can never be unified and neither can their teachings be brought together”. In short, Sheikh Ahmad Sirhindi was also a social reformer, for several social problems of Muslims were resolved in the era due to his untiring efforts.

“He the guardian of the estate of millah in India
Whom Allah awakened at the right time.”

While Sirhindi’s works involving religion directly are quite rational – for he was a religious leader – his efforts to change the whole political scenario of the time are also astonishing. To bring such a 180-degree political change, Sheikh Sirhindi wrote numerous letters (collected as Maktubat e Imam Rabbani), addressing his contemporaries because of their authority over the people. His eloquence and speech had such an effect that the king himself declared prostration before himself illegal. Moreover, the tone of the administration changed, and Akbar’s Din – e – Ilahi got shattered. Sheikh Sirhindi placed demands before the Emperor, which were all granted by the issuance of royal decrees. It is worth mentioning that Sheikh Sirhindi had a strong and long-term effect on Akbar’s progeny. Jahangir, Shah Jehan, and Aurangzeb all worked for the religion, and the liberalism once prevalent in Akbar’s era almost vanished from the horizon. Moreover, it was Sheikh’s efforts that made Muslims realize their difference from the other nations of the subcontinent. They realized that they would not be able to co-exist with other nations, especially Hindus, who could threaten their cultural, religious and social values. In short, Sheikh Ahmad Sirhindi was a great political reformist, and he’s bringing the Mughal emperors under one flag of Islam was a favour the Muslim Ummah would never be able to pay back.

Analyzing the then situation of the Muslims of the subcontinent, the efforts of Sheikh Sirhindi stand out as crucial if Islam were to be saved. He’s fighting against the elite, and even the king himself shows the strength of his character and the firmness of his resolution to help the Muslims turn over a new leaf and regain their long-lost worth. Moreover, it would not be wrong to claim that people had nowhere else to look for guidance after wandering away from the true teachings of Islam when the Sheikh came to their help. Although there were several hurdles in Sheikh Sirhindi’s way, he never gave up hope or courage and gathered the then Muslims under the flag of true Islam.

“The one who did not bow his head to Jahangir
Whose warm breath lends heat to the freemen.”

In conclusion, Sheikh Ahmad Sirhindi proved himself a God-sent help, a guide, and a reformer in the true sense of the word. He faced trials and tribulations, but his firm faith in the Almighty and empathy for the condition of the Muslims never let him bow down in the face of difficulties. During the time, his well-planned reform movement worked holistically, covering all the social, political, moral, and – most importantly – religious needs of the Muslims. First, he countered the religious ills prevalent in the society; then, he moved on to improve the society, and, similarly, he brought about an economic change as Islamic economic laws were re-implemented. Last but not least, the root of all evils, Akbar’s Din-i-Ilahi, was shattered, and Shariah was imposed – rather than the sole following of mysticism – bringing a revolution in the political environment of the subcontinent. In a nutshell, Shaikh Sirhindi’s emergence as a social, political, and religious leader was the bright spark that enlightened the then Muslim’s deteriorating situation in the subcontinent, and they were able to practice Islam in its true spirit. 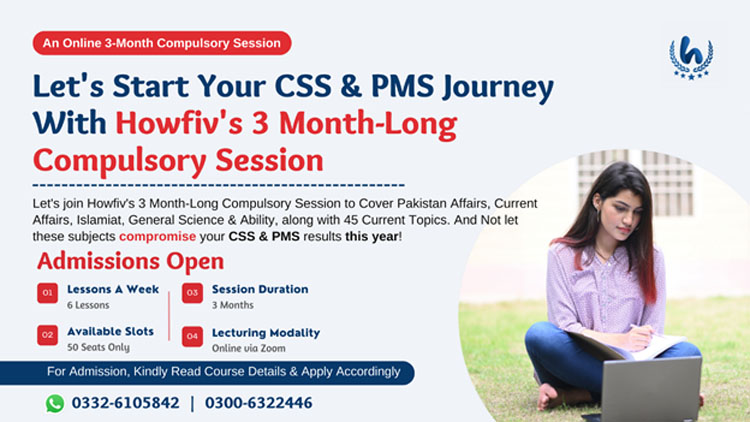 The following are the some solved questions attempted by Sir Kazim Ali’s students who scored the highest marks in compulsory subjects. Click on any to land Cssprepforum, Pakistan’s largest CSS and PMS exams preparatory website, and start learning. All the questions have their breakdowns, outlines, and solutions.