• Prime Minister Shehbaz Sharif on September 16, 2022 called upon regional countries to come up with Pakistan-specific programmes on climate change as the nation continues to reel from the devastating impact of the global natural phenomenon.
• `This climatic injustice has befallen us despite the fact that our carbon emission is less than one per cent,` the prime minister said in his address to the Shanghai Cooperation Organisation`s (SCO) Council of Heads of State meeting in Samarkand.
• The prime minister`s call to the SCO members came in the wake of recent flash floods in Pakistan that wreaked havoc on the livelihood and infrastructure across the country, killing more than 1,500 people, including 400 children, and damaging millions of houses.
• `I earnestly appeal to all of you that let the SCO standup and take steps against this devastation through sustainable programmes, he said

2. UN yet to deploy `tried and tested` cluster approach

• Two weeks on after the announcement of the UN flash appeal to help Pakistan cope with massive losses incurred due to unprecedented noods, the world body has yet to deploy its `cluster approach` to improve the efficacy of the local and global humanitarian response to this disaster of epic proportions.
• UN Resident and Humanitarian Coordinator Julien Harneis told Dawn that the UN system will be working in `government-led sectors`, and added that they will fully support the government in its efforts.
• Similarly, a UNICEF official said a technical working group on child protection has been formed within the organisation, which is functional in two flood-affected districts in Punjab

3. Cholistan land to be allotted to 20,000 farmers for five years

• The Punjab government has decided to give the government land in Cholistan to 20,000 local farmers for temporary cultivation for a period of five years in a transparent manner.
• This was decided in a meeting chaired by Chief Minister Parvez Elahi at his office on September 16, 2022.
• CM`s Special Assistant Dr Muhammad Afzal, MPA Chaudhry Ahsan, Senior Member Board of Revenue (SMBR) Zahid Akhtar Zaman, Principal Secretary to CM Muhammad Khan Bhatti, former principal secretary GM Sikandar and Cholistan Development Authority Managing Director Mehr Muhammad Khalid attended the meeting, while the Bahawalpur deputy commissioner participated through video-link

• The United Nations International Children`s Emergency Fund (UNICEF) representative in Pakistan has said that an estimated 16 million children have been impacted by `super floods` and at least 3.4 million girls and boys remain in need of immediate, lifesaving support.
• In a statement issued here on Friday, Abdullah Fadil, who recently concluded a two-day visit to the flood-affected areas of Sindh, said the situation was extremely grim in flood-hit areas with malnourished children battling diarrohea, dengue fever and several painful skin diseases.
• Mr Fadil said floods had now claimed thelives ofatleast528 children and each and every one of these deaths was a tragedy which could have been averted

5. US assures Pakistan of help to cope with flood aftermath

• The White House has assured Pakistan of its continued support in dealing with the consequences of this year`s unprecedented floods as UN Secretary General António Guterres urged the international community `not to lose one moment` in helping Islamabad deal with this `gigantic` relief and rehabilitation task.
• `My appeal to international financial institutions and my appeal to countries that have the financial capacity is not to lose one moment in providing Pakistan with the financial resources that are necessary for the gigantic tasks that are in front of us,` the UN chief said 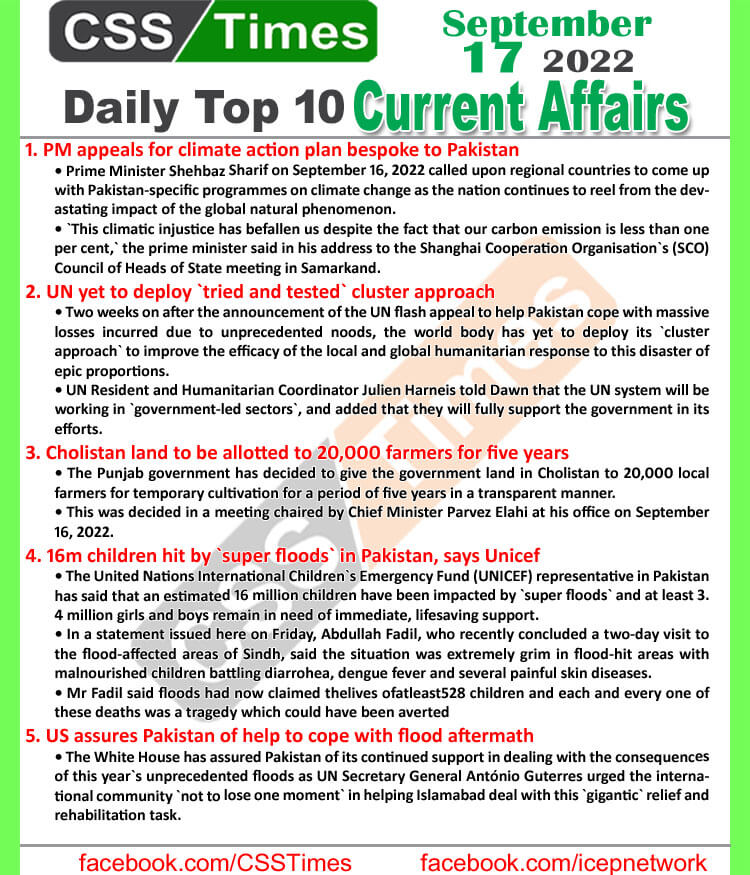