• The Asia-Pacific Group (APG) on September 12, 2022 Laundering has rated Pakistan`s level of effectivenessas`low`on10 out of 11 international goals on anti-money laundering and combating the financing of terror (AML/CFT), even though the country is now compliant on 38 out of 40 technical recommendations.
• The Sydney-based regional affiliate of the Financial Action Task Force (FATF) released an update, as of Sept 2, on the rating of its regional members suggesting that Pakistan had a `moderate level of effectiveness` on only one out of 11 outcomes.
• Underthis`immediate outcome`, Pakistan extends international cooperation on appropriate information, financial intelligence, and evidence, and facilitates action against criminals and their assets.
• A 15-member joint delegation of FATF and APG paid an onsite visit to Pakistan from Aug 29 to Sept 2 to verify the country`s compliance with a 34-point action plan committed with FATF at the highest level in June 2018.

• The Election Commission of Pakistan (ECP) on September 12, 2022 announced the new date for by-elections on four seats, one in the National Assembly and three in the Punjab Assembly.
• In a meeting chaired by Chief Election Commissioner Sikandar Sultan Raja, the decision was made to hold polls on NA-157 Multan, PP-139 Sheikhupura, PP-241 Bahawalnagar and PP-209 Khanewal on October 9.
• The commission had earlier postponed by-polls on nine NA seats, which were vacated after the de-notification of PTI lawmakers whose resignations were accepted by the speaker. However, ECP is yet to announce a new date for polls on those seats as it seeks clarity from the Islamabad High Court (IHC) over the status of denotified MNAs.

• The government on September 12, 2022 launched its `Digital Flood Dashboard` to ensure transparency in the allocation of funds and to keep the nation informed about the rescue and relief activities in the flood-hit areas.
• Meanwhile, Federal Minister for Climate Change Senator Sherry Rehman warned that Sindh is still in a perilous situation as Indus River is still in high flood at Kotri Barrage with inflows of more than 600,000 cusecs.
• The dashboard was launched by Planning Minister and National Flood Response and Coordination Centre (NFRCC) chief Ahsan Iqbal. Speaking on the occasion, the minister said the portal had been launched on the directives of Prime Minister Shehbaz Sharif to ensure transparency and provide information to the general public as well as donors about the relief activities and distribution of funds.

• As aid and assistance from foreign countries continued to pour into Pakistan in the wake of flood devastation, Google on September 12, 2022 launched an international appeal to collect relief funds.
• The most used search engine in the world launched the appeal, asking its billions of users across the globe to donate $15, $25 and $50 each.
• The appeal included a link to a report by the Centre for Disaster Philanthropy (CDP) and Human Rights Watch, endorsing the need for immediate financial and material support to the country.
• The CDP report noted that the floods have affected all four provinces and approximately 15pc the population. The HRW report said `the floods show the need for climate action`

• The country chief of the World Health Organisation (WHO), Dr Palita Mahipala, assured the flood-affected people in Balochistan on September 12, 2022 that his organisation would do its best to protect them from water-borne diseases.
• Dr Palita gave the assurance during a day-long visit to a tent city in Nasirabad for flood-stricken people.
• He held meetings with officials of the local administration and the health department to assess the most pressing needs of the displaced people. Dr Palita said floods had caused massive destruction in Balochistan and the affected people badly needed special health facilities and attention.
• He said the WHO had deployed teams in areas devastated by the floods to help the people protect themselves from malaria, diarrhoea and skin diseases 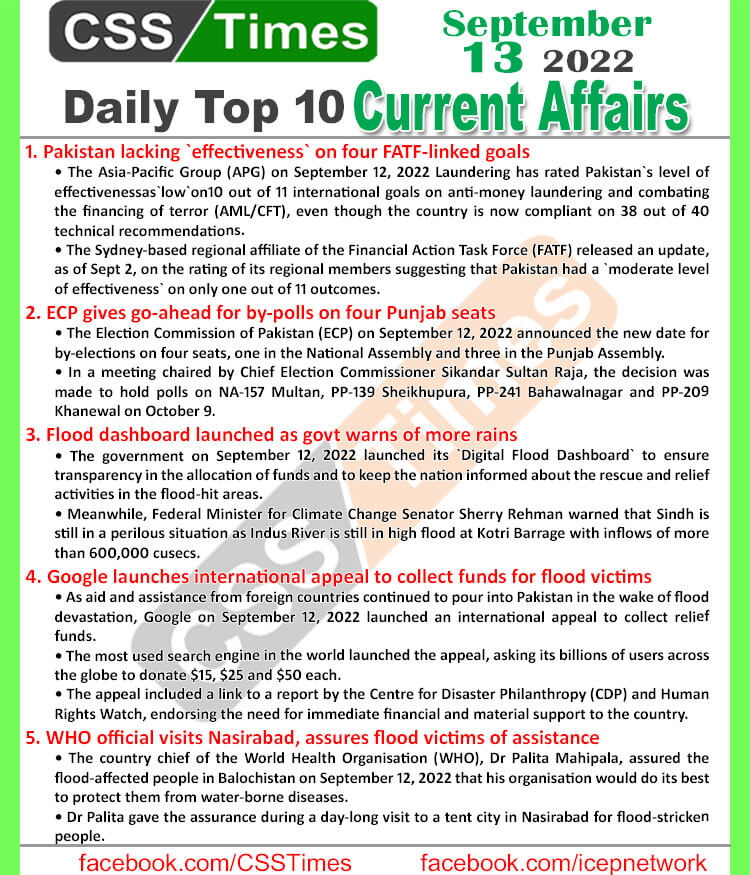