• Kashmir`s resistance leader Yasin Malik was sentenced to life imprisonment on May 25, 2022 following his conviction last week by a special court on terror-related charges.
• The National Investigation Agency (NIA) prosecuting the case was seeking death sentence for the 56-year-old leader, who has refused to contest the bevy of terror-related charges pressed against him.
• Protests broke out in the Maisuma district of Srinagar`s old quarter, where Malik lived in a spartan home with modest furniture. Parts of Srinagar saw a shutdown before the court verdict came.
• The All Parties Hurriyat Conference condemned the verdict, saying that Yasin Malik since 1994 pursued peaceful and democratic means of conflict resolution

• Pakistan and the International Monetary Fund (IMF) failed on May 25, 2022 to reach an agreement on an economic bailout mainly because of the government`s indecision on fuel and electricity subsidies and resultant next year`s budget uncertainties.
• Informed sources said that in the absence of a decision on fuel and electricity subsidies, it was unclear how the overall fiscal and external deficits would look like, not only at the end of the current fiscal year but also the next fiscal year.
• Therefore, it would be equally uncertain how these deficits would be funded, what kind of revenue measures would be required and what would be the shape of social sector and development allocations. `Our team is returning tonight empty handed,` an official said.
• A senior government official said the IMF mission showed relaxation to the extent of allowing the authorities to take a decision within a couple of days to steer clear the situation if they wanted to get back on table

• The National Assembly`s Standing Committee on Water Resources was informed on May 25, 2022 that Sindh was being deprived of 46 per cent of its water share in Punjab (between Taunsa and Guddu barrages) and Balochistan was losing almost 84pcofits share in Sindh.
• This was the crux of a meeting of the standing committee presided over by MNA Muhammad Yousaf Talpur, who attributed the water loss in Punjab to theft and recommended that water distribution among the provinces should be in line with para-2 of the 1991 accord in all circumstances instead of a three-tier formula adopted by the water regulator to address the shortage.
• MNA Khalid Magsi, who headed a subcommittee appointed by the NA standing committee, reported after a field visit and measurement monitoring that trust deficit among the provinces was the most critical issue at present when it came to measurement of water discharges at different stations, particularly Taunsa, Guddu and Sukkur barrages

• The Ministry of Education is yet to introduce an updated national education policy as the current one is in need of changes.
• `A lot of work has already been done and revision of the Education Policy 2009 would not be a big deal for the education ministry,` said an official of the ministry.
• However, he said, announcements to change it had also been made in the past but no proper work was done.
• During the PML-N government`s tenure (2013-18) it had announced on many occasions that it was going to amend the national education policy and a draf t was prepared but it was never finalised

• UK Minister for Armed Forces James Heappey on May 25, 2022 said Pakistan`s political upheaval was because of domestic factors rather than some sinister foreign plot and looked relieved that there was now a convergence of views on international order.
• The British minister, while talking to journalists at a virtual session during his visit to Islamabad, said: `What is happening in Pakistan at the moment politically is entirely the consequence of Pakistan`s domestic politics. And any suggestion that there is somehow some sort of outside interference is utterly fanciful.
• Mr Heappey`s comments came as PTI`s long march was under way. PTI chairman Imran Khan believes that the US conspired with local elements to dislodge his government because of his visit to Moscow to strengthen bilateral relations with Russia. Washington has already denied the allegation 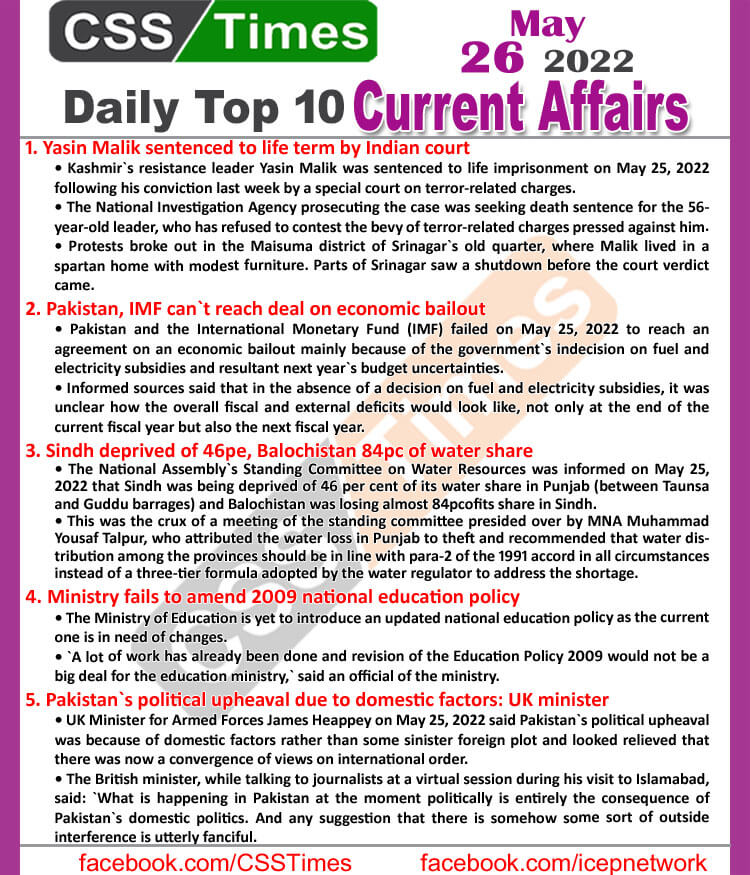