• Pakistan`s prevailing irrigation water shortage surged close to 45pc on May 24, 2022, compelling the Indus River System Authority (Irsa) to request the provincial governments to `plan in advance the utilization of available supplies in the river system efficiently, cautiously and judiciously during the dip`.
• In view of the `alarming water situation`, Irsa also asked the provincial irrigation secretaries to place carefully estimated rationalized indents (water requirement order by provinces) without any wastage till the improvement of water situation is seen in the first half of June 2022.
• Irsa informed the provincial irrigation secretaries in a joint letter that currently 40-45pc shortage was being distributed among Punjab and Sindh at the rim-stations, `resultantly a massive dip is likely to hit the Indus Basin Irrigation System with a lag time of about five to 15 days to the provinces` due to zero storage in the reservoirs.
• As a result, Punjab is being given 65,000-cusec water against its current share of 113,000 cusecs

• Saudi Arabia is finalising the extension of the kingdom`s $3 billion deposit to Pakistan, Saudi Minister of Finance Mohammed al-Jadaan told Reuters.
• `We are currently finalising extending the $3 billion deposit to Pakistan,` he said on the sidelines of the World Economic Forum in Davos.
• Last year, Saudi Arabia deposited $3 billion in Pakistan`s central bank to help support its foreign reserves.
• Jadaan did not offer further details, but on May 1 the two countries said in a joint statement that they would discuss the possibility of supporting the deposit by extending its term `or through other options`

• Antibiotic use in Pakistan has increased by 65pc over the last 16 years and the misuse and overuse of antimicrobials by health practitioners has increased resistance in humans which has resulted in severe illness and even deaths.
• To address this problem in the capital, Islamabad Healthcare Regulatory Authority (IHRA) officials and representatives of the Fleming Fund programme have signed a memorandum of understanding (MoU) to combat antimicrobial resistance (AMR), a statement issued by the IHRA said.
• The MoU will allow interventions in five public and private hospitals in Islamabad. Healthcare professionals and administrators of selected hospitals will be trained in AMR concepts and the importance of AMR stewardship

4. Cabinet to examine proposals for use of EVMs

• The federal cabinet decided on May 24, 2022 to examine proposals for the use of electronic voting machines (EVMs) and to allow overseas Pakistanis to vote in the next general election.
• The cabinet made a decision on the proposals subject to parliament`s approval of the report on a pilot project to be conducted on the two issues.
• The federal cabinet ratified the prime minister`s advice to the president regarding appointment of the Punjab governor.
• The cabinet also approved the formation of a special committee, to be headed by the federal law minister, with a mandate to hold consultations with all institutions and experts on enforced disappearances

• With continuous strong growth trajectory, Pakistan`s Islamic banking industry is estimated to materially outpace conventional banking by 2026, according to Moody`s Investors Service.
• `Huge growth over the past decade shows no signs of slowing. The Islamic banking industry in Pakistan has grown by 24 per cent a year on average over the last decade, expanding by 30.6pc in 2021 alone,` said Moody`s in its latest report on Tuesday.
• `We expect growth in Islamic banking to continue to materially outpace conventional banking, reaching a market share of total assets and deposits of around 30pc by end 2026, with net financings market share at around 33pc,` it said attributing this growth to a combination of a predominantly Muslim population, still modest financial inclusion, and the commitment of the government and regulators as the key driving forces 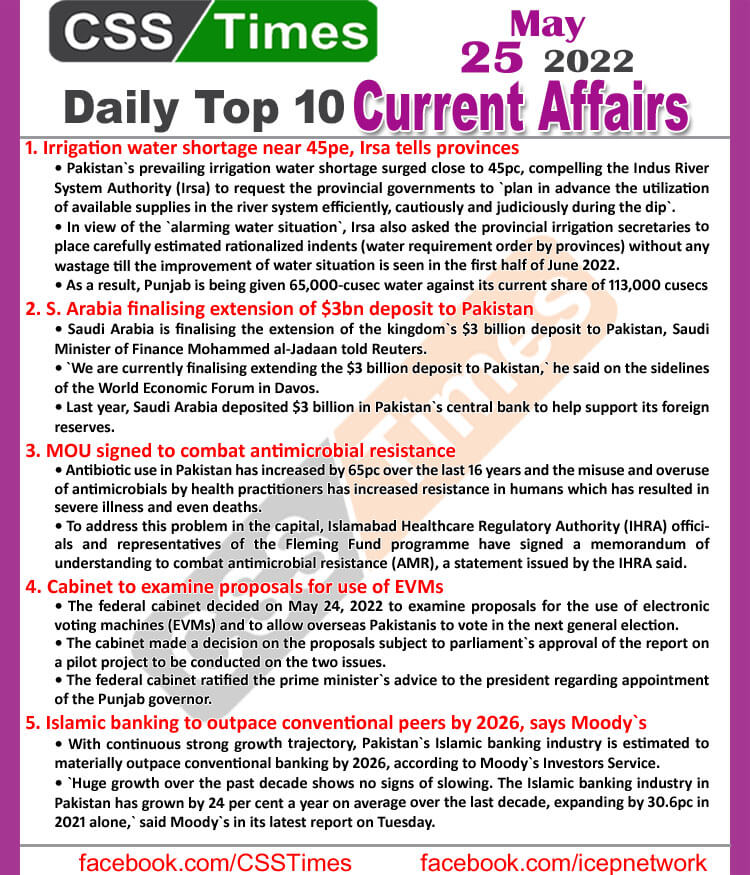