• India obstructed Pakistan`s participation in a conference hosted by China last week.
• Pakistan`s absence from the `High level Dialogue on Global Development` on the sidelines of BRICS summit on Friday prompted speculations about the reasons for not being invited to the multilateral event.
• Foreign Office, while clarifying the situation on Monday, said: `Regrettably one member blocked Pakistan`s participation.` The FO did not name any country, but a diplomatic source on the background confirmed that it was India.
• Besides the five members of BRICS Brazil, Russia, India, China and South Africa the event held in a virtual format was participated by Algeria, Argentina, Egypt, Indonesia, Iran, Kazakhstan, Senegal, Uzbekistan, Cambodia, Ethiopia, Fiji, Malaysia and Thailand

• The Sindh Assembly, in the early hours of Tuesday quickly passed the Rs1.713 trillion tax-free budget for financial year 2022-23 in the presence of MQM-P members and the absence of lawmakers belonging to the PTI, GDA and two other opposition parties, after adjourning and reconvening the house post-midnight.
• Earlier in the day, the house had one of the lengthiest sittings lasting over 12 hours as Leader of the Opposition Halim Adil Sheikh spoke for over five hours, mainly criticising the provincial government and praising PTI chairman and former prime minister Imran Khan. Chief Minister Syed Murad Ali Shah also spoke for more than one hour.
• The budget was passed in 10-minute proceedings after the house hurriedly approved all 78 demands for grants on supplementary expenditure for 2021-22 moved by the chief minister, who also holds the portfolio of finance

• In a bid to produce cheap electricity to provide relief to domestic consumers and industries, Prime Minister Shehbaz Sharif on June 27, 2022 directed the authorities concerned to import coal from Afghanistan.
• Presiding over a meeting, the prime minister approved the import of high-quality coal from Afghanistan in rupees instead of dollars to save the country`s precious foreign exchange.
• `This will not only generate cheap electricity but also help save the country`s precious foreign exchange,` he was quoted by the Prime Minister Office as saying

• Pakistan on June 27, 2022 signed a debt relief agreement with France for suspension of $107 million loan under the G-20 Debt Service Suspension Initiative (DSSI) framework allowed to the poor nations to absorb Covid-19 shock.
• This amount, initially repayable between July and December 2021 will now be repaid over a period of six years, including one year grace period in semi-annual installments.
• The agreement was signed by Secretary Economic Affairs Mian Asad Hayaud Din and French Ambassador in Islamabad Nicolas Galey.
• The GOP has already signed agreements with the French Republic for suspension of $261 million. Due to the support extended by the development partners of Pakistan, the G-20 DSSI had provided the fiscal space to deal with the country`s urgent health and economic needs

• The Gilgit Baltistan government on June 27, 2022 presented the budget for the fiscal year 2022-23 with a total outlay of Rs119.3 billion. The annual budget was presented in the Gilgit Baltistan Assembly.
• Finance minister Javed Ali Manwa presented the budget during a special session chaired by Deputy Speaker Nazir Ahmed Advocate.
• Presenting the budget, Mr Manwa said Rs61.4 billion had been proposed for ongoing expenditures while Rs47.8 billion had been set aside for new development schemes.
• Interestingly, opposition parties` members, including from Pakistan Peoples Party, Pakistan Muslim League-Nawaz and Jamiat Ulema -i-Islam Fazl remained calm during the budget speech 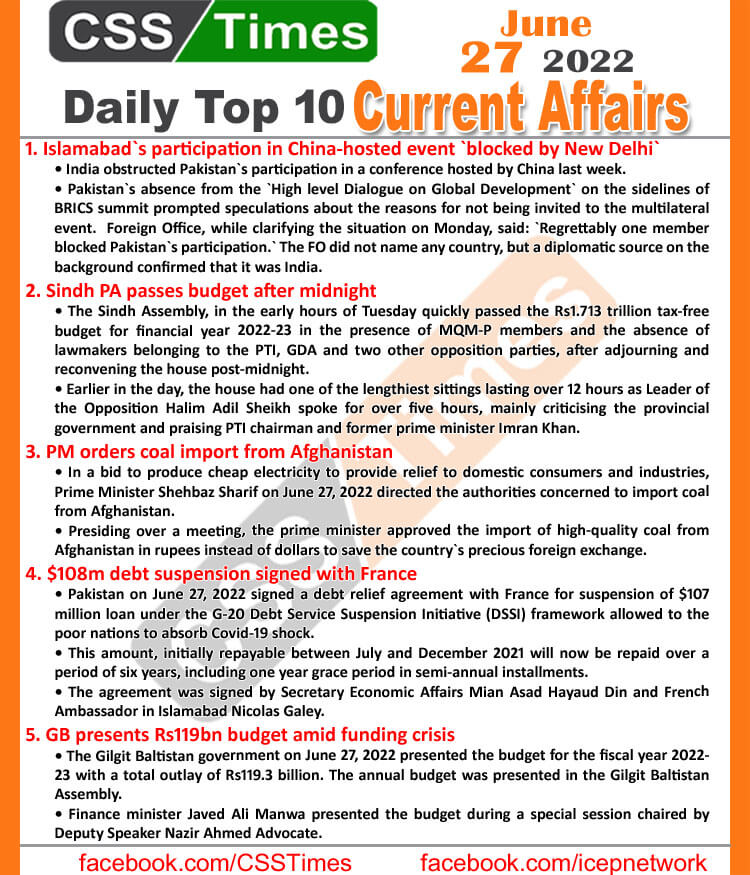