• Prime Minister Shehbaz Sharif has called for a `grand dialogue` involving all stakeholders for the sake of the country`s progress by keeping sectors like education, health and industries above petty politics.
• `Shouldn`t we learn a lesson even after 75 years [of winning the independence] and continue to do petty politics?` he asked, while opening the Indus Hospital, a private charity facility, here on Sunday.
• He emphasised that none of the stakeholders should indulge in politicking on the development sector so that [consistent policies] might take the country forward on the road to progress.

• President Dr Arif Alvi and Prime Minister Shehbaz Sharif have strongly condemned the derogatory remarks recently made by two leaders of India`s Bharatiya Janata Party (BJP) against the Holy Prophet (PBUH).
• `I condemn in the strongest possible words hurtful comments of India`s BJP leader about our beloved Prophet (PBUH). [I have] said it repeatedly India under Modi is trampling religious freedoms and persecuting Muslims. The world should take note and severely reprimand India, the premier said in a Twitter posting on Sunday.
• `Our love for the Holy Prophet(PBUH) is supreme.
• All Muslims can sacrifice their life for the love and respect of their Holy Prophet (PBUH),` he said

3. ECP to accept address shown on CNIC only

• The Election Commission of Pakistan (ECP) has abolished the option of more than two addresses of voters other than those mentioned on their Computerised National Identity Cards (CNICs) in an attempt to check fake votes, according to a senior official.
• However, voters can change their address anytime by following set procedure of the commission.
• The social media was inundated with complaints last week that the ECP had changed the voter registration data of several citizens without informing them, with most claiming that their polling stations had been moved by the election watchdog to inconvenient locations much farther than their previous allocations.

• Security forces killed seven terrorists during two intelligence based operations in Janikhel subdivision of Bannu district and Hassenkhel area of North Waziristan tribal district on June 5, 2022, the military said.
• The Inter-Services Public Relations (ISPR), the armed forces` media affairs department, said in a statement that members of security forces conducted an IBO in Janikhel area of Bannu district, killing five terrorists.
• Another operation was carried out in Hassenkhel area of North Waziristan in which two terrorists were killed

• India`s ruling Bharatiya Janata Party (BJP) on June 5, 2022 said it had suspended BJP spokeswoman Nupur Sharma in response to comments she made during a TV debate about the Holy Prophet (peace be upon him).
• The BJP said in a statement on its website that the party respected all religions.
• `The BJP strongly denounces insult of any religious personallties of any religion.` Sharma said on Twitter she had said some things in response to comments made about a Hindu god but it was never an intention to hurt anyone`s religious feelings. `If my words have caused discomfort or hurt religious feelings of anyone whatsoever, I hereby unconditionally withdraw my statement 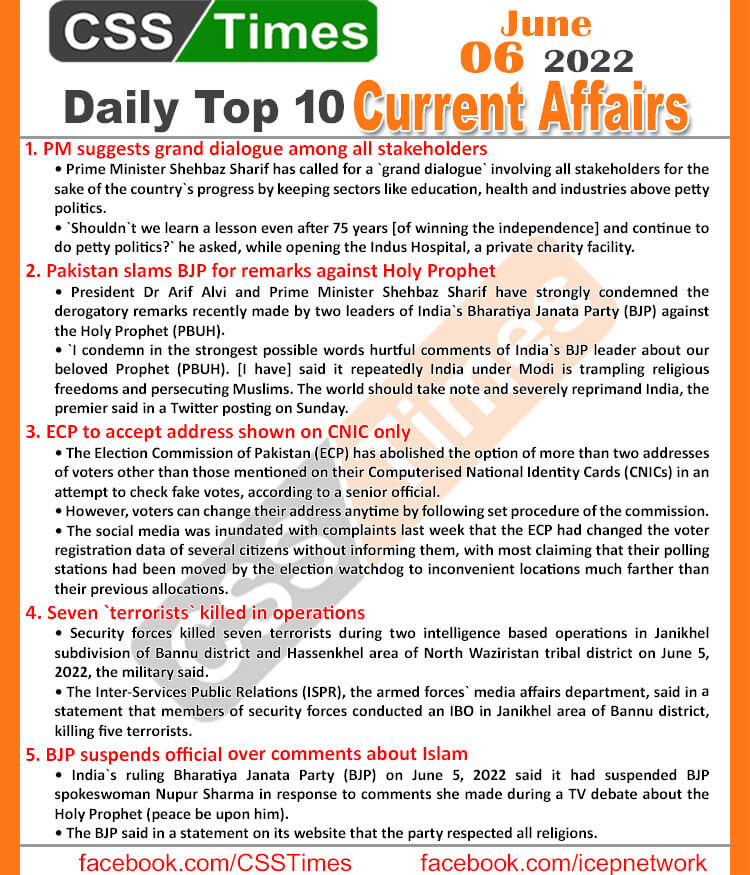