• Continuing to create hurdles for the coalition government of Prime Minister Shehbaz Sharif, President Dr Arif Alvi on June 4, 2022 refused to assent to the bills recently passed by the two houses of parliament, seeking amendments to the accountability and election laws, and returned the two pieces of legislation to the government for `consideration and detailed deliberations` by parliament and its committees.
• The president, who belongs to the former ruling party Pakistan Tehreek-i-Insaf (PTI), has returned the two crucial bills using his powers under Article 75(1) of the Constitution, according to an official handout issued by the President`s Office.
• Article 75(1) states: `When a bill is presented to the president for assent, the president shall, within [ten] days (a) assent to the bill; or (b) in the case of a bill other than a money bill, return the bill to the Majlis-e-Shoora (Parliament) with a message requesting that the bill or any specihed provision thereof, be reconsidered and that any amendment specified in the message be considered

• Serious differences have cropped up between the telecom sector regulator and internet service providers (ISPs) as the former wants to implement the central DNS (Domain Name System) while the latter are concerned that the move will make the internet speed slow and its rate costly.
• The DNS is a coded system consisting of 12 digits used to identify internet protocol addresses, which translates them into letters to identify a website.
• All the ISPs in the country, including Nayatel, PTCL, SCO, Jazz, Zong, TWA, Wateen, Multinet, Nexlinx, Cybernet and KK Networks, attended a meeting recently called by the Pakistan Telecommunication Authority (PTA) to discuss the steps for implementing the centralised DNS blocking policy

3. Economic growth target set at 5pc with Rs800bn PSDP for next fiscal year

• The Annual Plan Coordination Committee (APCC) on June 4, 2022 finalised Rs800 billion worth of the Public Sector Development Programme (PSDP) to achieve an economic growth rate of 5 per cent in 2022-23.
• The PSDP for next year is Rs100bn lesser than the current year`s allocation of Rs900bn, while the economic growth target of 5pc is also slightly lower than the current year`s provisional output estimate of 5.97pc.
• The APCC also recommended a Rs2.184 trillion including Rs346bn foreign aid as next year`s consolidated development budget for 2022-23 of the federal and provincial governments. This national development outlay will include the federal PSDP of Rs800bn. The National Economic Council (NEC) to be chaired by Prime Minister Shehbaz Sharif will approve these figures before the budget

• Saudi Arabia on June 4, 2022 welcomed its first batch of Haj pilgrims since before the coronavirus pandemic, which prompted authorities to sharply restrict the annual ritual.
• The group from Indonesia landed in the city of Madina and was set to travel south to Makkah in the coming weeks to prepare for the Haj next month, state media reported.
• `Today we received the first group of this year`s pilgrims from Indonesia, and the flights will continue from Malaysia and India, Mohammed al-Bijawi of the country`s Haj ministry told the state-run Al-Ekhbariya channel

• China will launch a spacecraft on Sunday carrying three astronauts to the core module of the unfinished Chinese space station, where they will work and live for six months as construction enters advanced stages.
• A Long March-2F rocket carrying the Shenzhou-14 spacecraft is set to blast off from Jiuquan Satellite Launch Centre in the northwestern province of Gansu at 10:44am local time (0244 GMT) on Sunday, a China Manned Space Agency official told a news conference on Saturday.
• Mission commander Chen Dong will be accompanied by Liu Yang and Cai Xuzhe aboard Shenzhou, meaning `Divine Vessel` in Chinese. `All preparations for the launch are basically ready,` said Lin Xiqiang, an agency official 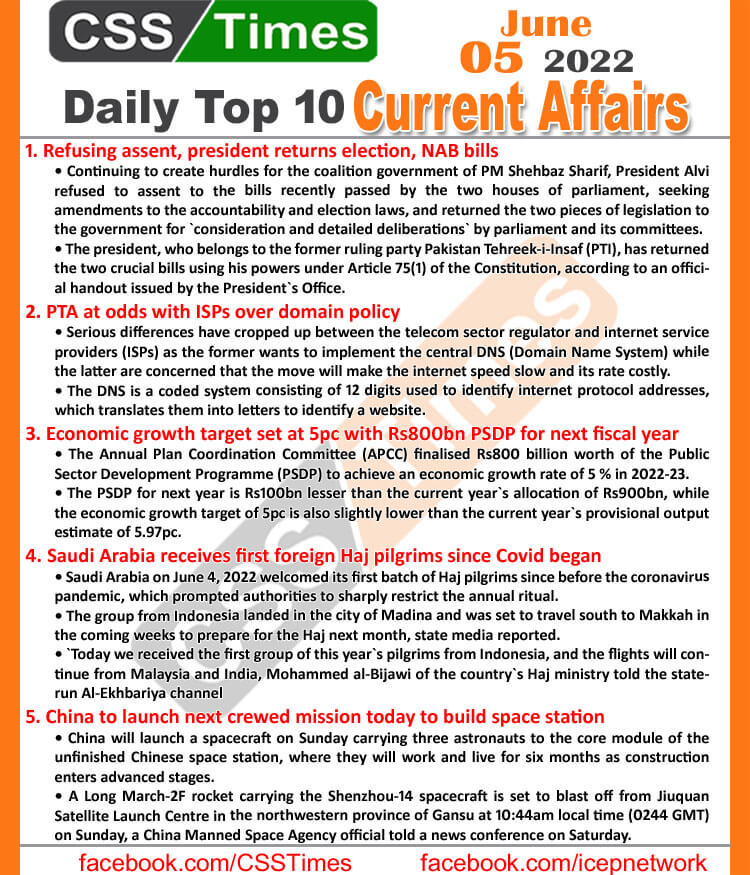