1. Economic remedy proves to be the most bitter pill

• To strike a deal with the International Monetary Fund (IMF) on an urgent basis, the government immediately increased the prices of petroleum products by Rs30 per litre on June 2, 2022 and secured a determination from the power regulator for about Rs8 per unit increase in electricity rates for the next fiscal year starting July 1.
• Speaking at a news conference, Finance Minister Miftah Ismail also announced that a tax amnesty scheme announced by former prime minister Imran Khan was also coming to an end on July 2 without any application from anyone to avail it.
• He conceded that the inevitable decision would increase inflation and create problems for people but said he could not let the country go bankrupt because of the wrong decisions of the previous government as international prices were going up and the government was suffering about Rs120-130bn per month loss on petroleum subsidies, excluding taxes

• With deteriorating external and fiscal indicators, Moody`s Investor Service downgraded Pakistan`s outlook to negative from stable on June 2, 2022 amid a delay in a deal with the International Monetary Fund (IMF) for an economic bailout.
• The New York-based credit rating agency affirmed the government of Pakistan`s B3 local and foreign currency issuer and senior unsecured debt ratings.
• `The decision to change the outlook to negative is driven by Pakistan`s heightened external vulnerability risk and uncertainty around the sovereign`s ability to secure additional external financing to meet its needs, Moody`s said in a statement

• Chinese envoy and Pakistani leaders on June 2, 2022 warned of growing threats to China-Pakistan Economic Corridor from fake news and disinformation about the mega-development project and emphasised the need for cooperation in countering it.
• The issue was highlighted at the 7th CPEC Media Forum, which was jointly hosted by the Chinese Embassy in Islamabad, Pakistan-China Institute, and China Economic Net, where the speakers talked about the potential of propaganda, misinformation and fake news to polarise public opinion, promote violent extremism and undermine the development project.
• CPEC has been widely projected in Pakistan as a game changer that would influence the region`s geo-strategic, geoeconomic and geo-political dynamics; and as an answer to its infrastructure shortcomings. But, at the same time media reports spread scepticism about it by pointing to the possibility of Pakistan falling in China`s debt trap, alleged absence of transparency in the projects, and environmental impact of the projects, especially coal-base d power plants

• The outlawed Tehreek-i-Taliban Pakistan (TTP) formally announced an `indefinite ceasefire` with the government late on Thursday night, following two days of intense talks with a grand tribal jirga in Kabul.
• A statement issued by the TTP spokesman, Muhammad Khurasani, said that substantive progress had been made in talks with the grand jirga of `Pashtun nation, particularly tribal elders and ulema`.
• The 57-member government-sponsored jirga left for the Afghan capital on Wednesday to continue negotiations with the TTP, mediated by the Islamic Emirate of Afghanistan and supervised by Sirajuddin Haqqani, the acting Afghan interior minister.
• A member of the jirga told Dawn there had been heated discussions between the two sides, and the sticking point was the TTP`s demand for the reversal of Fata`s merger with Khyber Pakhtunkhwa

• Pakistan has said at a UN non-proliferation debate this week that states have a `legitimate right` to avail dual-use technologies and materials, while keeping non-state actors away from those.
• India, however, used the open consultations of the UN Security Council on non-proliferation to insist that `new and emerging technologies` increase the risk of non-access actors getting their hands on weapons of mass destruction (WMDs).
• Pakistan argued that `insecurity of states` was `the principal driver of proliferation` and it `must be unreservedly addressed.
• `The right to access technologies and participation in the decision-making processes regarding global regulation of technology should also be enjoyed by all states in a non-discriminatory manner,` Pakistani delegate Gul Qaiser said 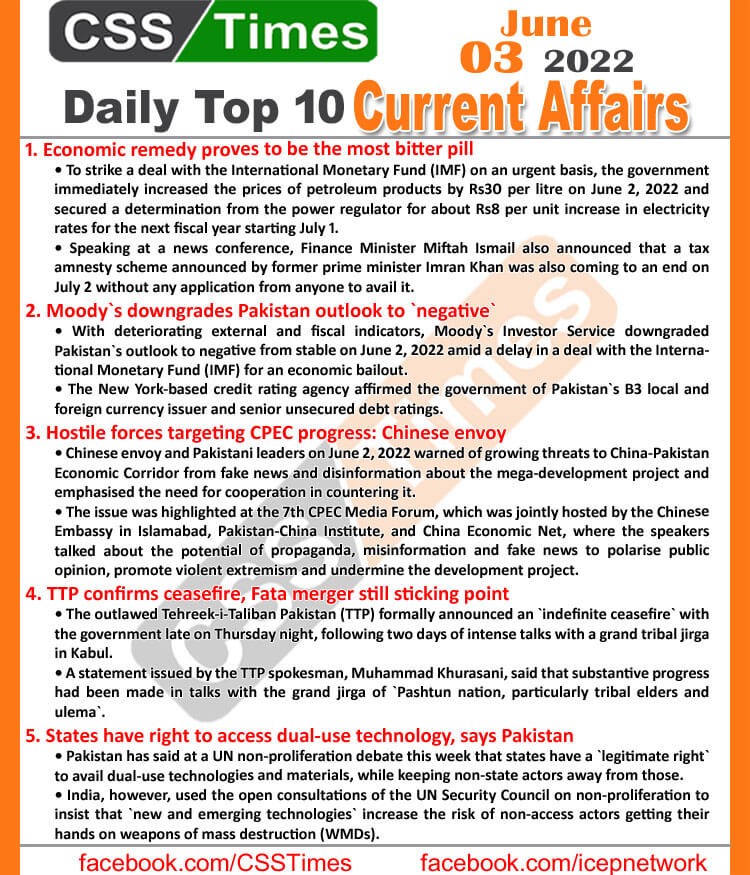