WELCOME TO CSS TIMES DAY BY  DAY CURRENT AFFAIRS, YOUR BEST SOURCE FOR UP-TO-DATE AND DAILY TOP CURRENT AFFAIRS 2022 FOR PREPARATION OF CSS, PMS, BANKING, NTS, RAILWAYS AND ALL COMPETITIVE EXAMS.  “DAY TO DAY CURRENT AFFAIRS” BASICALLY IS TOP 10 NEWS SUMMARY ON CURRENT HAPPENINGS OF NATIONAL AND INTERNATIONAL IMPORTANCE FOR ALL EXAMINATIONS

• Pakistan and Turkey on June 1, 2022 vowed to enhance their strategic and economic relations and agreed to take measures for eliminating terrorism.
• The countries made the commitments during a one-on-one meeting between Prime Minister Shehbaz Sharif and Turkish President Recep Tayyip Erdogan. They later made their pledge public during a joint press conference at Presidential Complex in Ankara.
• On an invitation from Prime Minister Shehbaz Sharif, Mr Erdogan agreed to visit Pakistan in September this year for talks on issues of mutual interests

• Another child was found infected with poliovirus in North Waziristan, taking the tally of patients reported in the tribal district to seven in just over a month.
• All cases have been reported from this southern district of Khyber Pakhtunkhwa and more are expected from the same area due to high refusal rate and instances of finger-marking without vaccination during campaigns.
• With the emergence of the latest case, the global count of wild polio in 2022 has reached eight, with only one case being reported from Afghanistan in January.
• This means that 87pc of the global cases have been reported from Pakistan

• Inflation escalates to a 28-month high of 13.8 per cent in May from previous month`s 13.4pc on the back of a steady increase in food and energy prices amid the weakening rupee, according to data released by the Pakistan Bureau of Statistics on June 1, 2022.
• The inflation-measured by the Consumer Price Index (CPI) has been on the rise since March, undermining earlier gains. The increase in CPI could have been much higher had the previous government not frozen oil prices at the current level from March until May 26.
• All the three indicators CPI, Sensitive Price Index (SPI) and Wholesale Price Index (WPI) measuring inflation saw an unprecedented spike in May

• The Lahore High Court has declared that the e-challans being issued to the motorists for violation of traffic rules by the Punjab Safe City Authority (PSCA) are illegal for having no legal backing.
• `The e-ticketing system has no sanction of law, it cannot sustain. Nullum crime nsinelege (no crime without law) is one of the fundamental principles of criminal law, Justice Tariq Saleem Sheikh observes in his judgement passed on a petition challenging the power of the safe city authority to issue e-challans.
• The judge had reserved the verdict on March 28

• The maiden meeting of Punjab cabinet on June 2, 2022 approved Rs200 billion subsidy on flour to ensure the commodity will be available to the masses at Rs490 per 10kg bag in the province.
• The eight-member cabinet`s meeting chaired by Chief Minister Hamza Shahbaz at the CM secretariat also approved the constitution of new board of Punjab Mass Transit Authority with Khwaja Ahmad Hasaan as its vice-chairman.
• The meeting also approved provision of wheat to the Khyber Pakhtunkhwa government as a gesture to promote inter-provincial harmony and strengthen the bonds of national unity. It also allowed procurement of one million metric tons of wheat from Pakistan Agricultural Storage and Services Corporation (Passco). 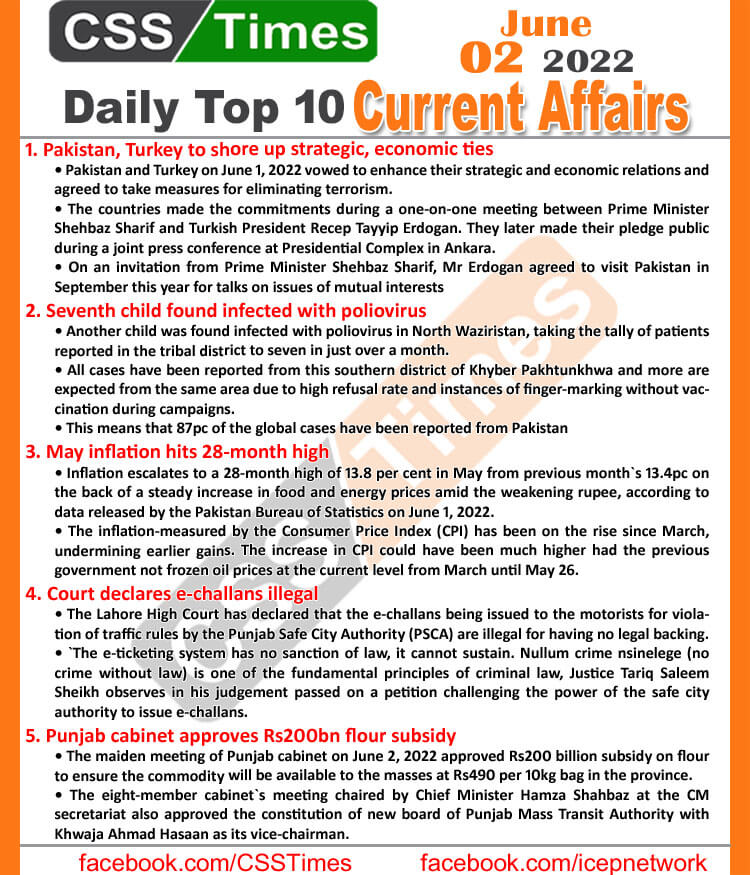