• A 37-member cabinet of Punjab`s `trustee` Chief Minister Hamza Shehbaz took oath of their offices here on July 24, 2022 evening, provoking the ire of the opposition PTI and PML-Q which termed it a violation of the court orders.
• The oath-taking ceremony was held at the Governor House around 16 hours before the Supreme Court is to take up on Monday the case related to the controversial runoff poll for the office of chief minister conducted on Friday.
• The decision to immediately form the provincial cabinet was taken at a meeting chaired by Prime Minister Shehbaz Sharif earlier in the day.
• Punjab Governor Balighur Rehman administered oath to the cabinet members

• The government is set to begin removing restrictions on the import of `non-essential and luxury items` imposed on Feb 19 and provide energy at subsidised rates electricity at nine cents per unit and gas at $9 per unit throughout the current fiscal year to make the country`s exports competitive.
• Sources told Dawn that a special virtual meeting of the Economic Coordination Committee (ECC) had been scheduled for Sunday to approve the subsidised energy rates, but was then postponed at the last moment for a day to be merged with another huddle on Monday with important items on the table

3. US to help Pakistan set up Centre for Disease Control

• The United States and Pakistan will discuss setting up a Centre for Disease Control (CDC) in Pakistan when they hold their first-ever health dialogue in Washington on Monday.
• A four-member Pakistani delegation, led by federal Minister for Health Abdul Qadir Patel, reached Washington on Saturday for the talks. Earlier this week, Pakistan also sought US support for its efforts to stabilise the economy.
• Last week, Director of the Pakistan Desk at the US State Department Neil W.

• The import of inexpensive medicines for cancer treatment from Russia, which came to a halt in February after Russia`s invasion of Ukraine, resumed after more than five months as the banks have started opening Letters of Credit (LCs) for the trade.
• With the new development, importers sound confident that Russian products would be available in the local market by the first week of August 2022, bringing an end to the misery of hundreds of cancer patients and their families.
• `We have formally received a nod from banks [for opening the LCs] recently and that formality has already been met by several importers,` said an importer

• The Khyber Pakhtunkhwa government has planned to introduce inclusive education in two schools of special education on pilot basis to enable the children to start a normal life.
• `We have given a proposal to the social welfare department to upgrade facilities in two of the 11 special education schools to enhance the mobility of physically challenged children, said Dr Mahboobur Rahman, a former head of physiotherapy department at Hayatabad Medical Complex.
• Speaking at a free medical camp at Habib Physiotherapy Complex Hayatabad on July 24, 2022, he said that number of special children was rising due to economic hardships, burgeoning poverty, surge in population in addition to war against terrorism in former tribal areas 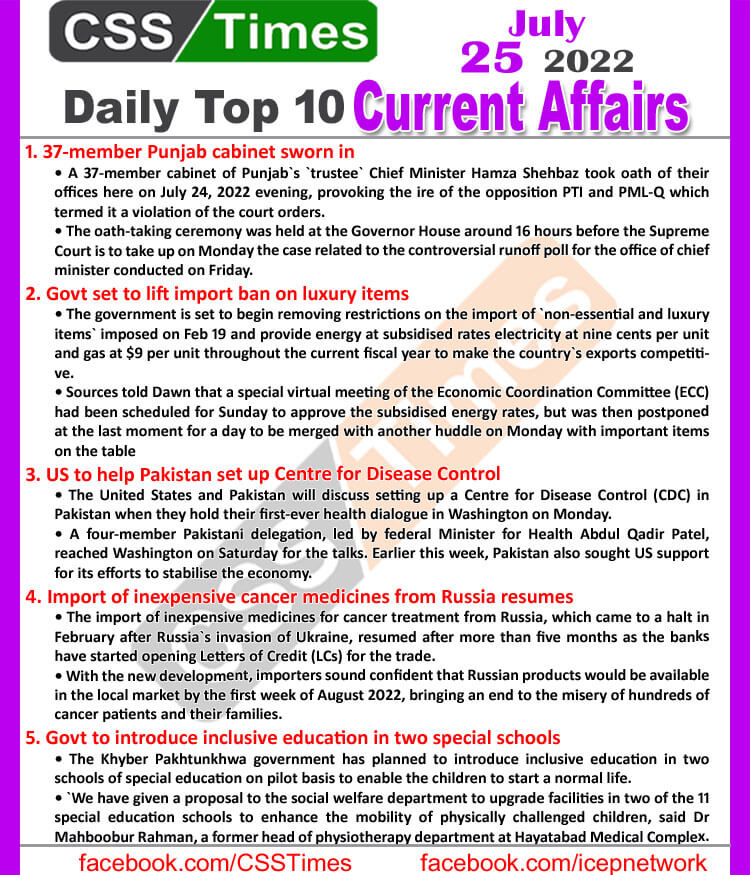