• The Supreme Court on July 23, 2022 provisionally allowed Hamza Shehbaz to continue as a `trustee` chief minister of Punjab with limited powers, as it observed that the ruling of the Punjab Assembly`s deputy speaker regarding rejection of votes of all Pakistan Muslim League Quaid (PML-Q) lawmakers in the run-off election for the CM was prima facie in violation of the court`s judgement and Article 63-A of the Constitution.
• A three-judge bench of the SC, headed by Chief Justice of Pakistan (CJP) Umar Ata Bandial, assembled at the court`s Lahore registry at 11am to take up a petition hurriedly filed on Friday midnight by Punjab Assembly Speaker Chaudhry Parvez Elahi, a candidate for the CM`s office against Hamza, against the ruling of Deputy Speaker Dost Muhammad Mazari. Justice Ijazul Ahsan and Justice Munib Akhtar were the other members of the bench.
• At the outset of the hearing, PTI senator Barrister Syed Ali Zafar, on behalf of Mr Elahi, explained to the bench the CM`s election held in light of the Supreme Court`s judgement passed on likely seemed to be a controversy regarding the proper understanding or comprehension of the statement of law in the judgement rather than an interpretation of a constitutional provision

• The federal government is seeking foreign investors for the Rawalpindi Ring Road and Economic Corridor project while Punjab government has failed to appoint a consultant to conduct a third-party validation for determination of an optimal route for the corridor.
• A senior official of the Punjab Planning and Development Department told Dawn that after Prime Minister Shehbaz Sharif`s visit to UAE, the federal government had enlisted five main projects to fetch foreign investment.
• These projects are: Parco coastal refinery Phase-I oil import terminal, Kharian-Rawalpindi Motorway, Rawalpindi Ring Road, Karachi Circular Railway and Rail Connectivity of Thar Block-II with railway network

• Pakistan`s $33.5 billion external financing needs are fully met for 2022-23, the central bank chief said on July 23, 2022, adding that `unwarranted` market concerns about its financial position will dissipate in weeks.
• Fears have risen about Pakistan`s stuttering economy as its currency fell nearly 8 per cent against the US dollar in the last trading week, while the country`s forex reserves stand below $10 billion with inflation at the highest in more than a decade.
• `Our external financing needs over the next 12 months are fully met, underpinned by our ongoing IMF programme,` State Bank of Pakistan Acting Governor Murtaza Syed said in an emailed reply to questions

• Pakistan and Afghanistan have reached an agreement to facilitate bilateral trade, especially coal for use in power generation to bridge the shortfall in electricity production in the wake of the high cost of furnace oil in the international market.
• Coal is already being imported in small quantities for power generation via Chaman border station in Balochistan. Under the new agreement, coal imports will start at custom stations in Kharlachi and Ghulam Khan in Khyber Pakhtunkhwa.
• The coal will be used in power production at two plants Hubco and Sahiwal plants. On July 5, the government authorised the trade of all rupee-denominated goods via land routes

5. 12 public libraries being set up in Khyber Pakhtunkhwa

• The achieves and libraries directorate is working for the establishment of public libraries in 12 districts with the help of Rs100 million allocated for the current budget, say officials.
• Officials told that under the plans, the province would have one library at the district level in future.
• They said the directorate was also working on a separate project to set up seven libraries in tribal districts.
• The officials said currently, there were public libraries in 18 districts and they included the Rehman Baba Library in Peshawar and Ghazi Tehsil Library in Haripur 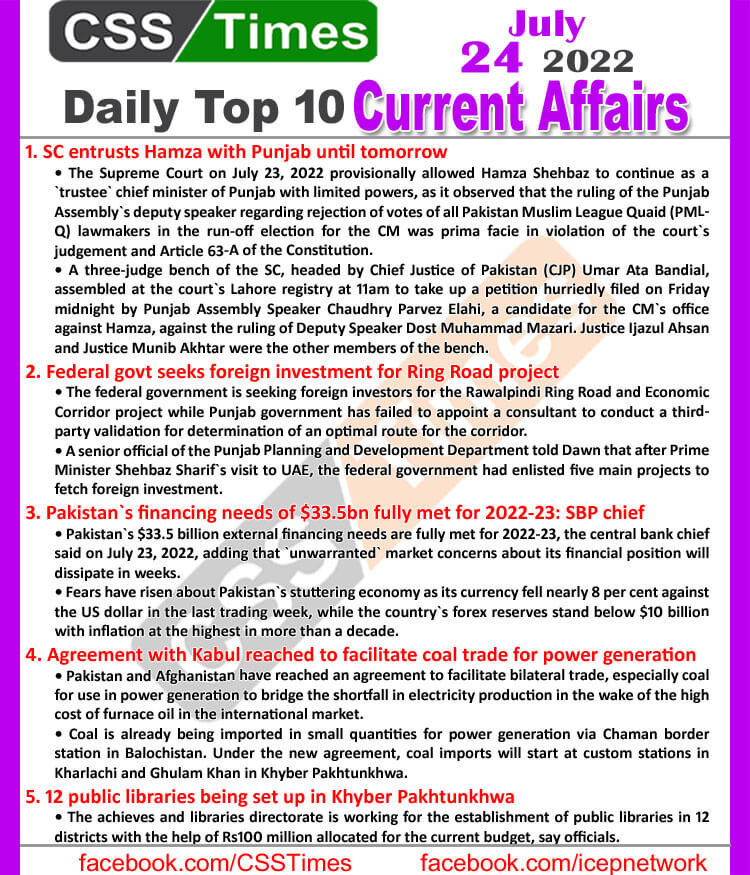