1. Parliamentary body to keep eye on talks with TTP

• The military on Tuesday secured the nod of the Parliamentary Committee on National Security`s for peace talks with the banned Tehreek-i-Taliban Pakistan (TTP) after conceding to the Pakistan Peoples Party`s demand for the process to be overseen by a parliamentary committee.
• `There was nearly a consensus that the talks should be held except for opposition by head of National Democratic Movement Mohsin Dawar,` one of the participants of the meeting told Dawn.
• The Prime Minister Office, in a statement on the meeting, meanwhile, said: `The Parliamentary Committee on National Security formally approved the process of negotiations and approved the formation of a `Parliamentary Oversight Committee`

• In less than a week after the approval of the federal budget 2022-23, the government on July 5, 2022 approved Rs193 billion worth of supplementary grants and relaxed the ban on non-essential and luxury items imposed three weeks ago to curb the import bill amid falling foreign exchange reserves.
• These decisions were taken at a meeting of the Economic Coordination Committee (ECC) of the Cabinet presided over by Finance Minister Dr Miftah Ismail. The meeting stopped short of declaring a `National Disease Emergency` as lumpy skin disease spread in the country with a possible economic loss of over Rs80bn besides international ramifications. The meeting agreed in principle to continue the subsidy scheme for five essential items and wheat flour but did not formally approve its cost estimates going beyond Rs70bn.

• As Pakistan`s exports to Afghanistan saw a deeper drop since the Taliban took control of Kabul in August 2021, the government on July 5, 2022 took a major decision to allow trade of all products to Kabul in the rupee via land routes owing to the non-availability of tradable currency through banking channels.
• The change in trade regime from dollar to rupee is considered to be one of the steps to reverse the downward trend in the coming months.
• The Economic Coordination Committee (ECC) of the Cabinet approved a summary of the commerce ministry amending the Import Policy Order (IPO) to allow trade with Afghanistan in rupees for a period of one year. It is believed the regime will remain in place until the restoration of regular banking channels in Afghanistan

• As the country reported over 600 cases of Covid-19 on a daily basis for nearly a week, the National Command and Operation Centre (NCOC) on July 5, 2022 released guidelines for the Eidul Azha, urging people to refrain from hugging and shaking hands and perform prayers in open areas.
• According to the NCOC, 18,950 tests were conducted during the past 24 hours, out of which 653 returned positive, taking the national positivity rate to 3.45pc.
• The number of patients in critical care has also increased to 162.
• The Eid, which will be celebrated on July 10, is a significant religious event, therefore, precautionary measures are needed to control the spread of the virus, the guidelines read.`Eidul Azha prayers should be organised in open spaces under stringent Covid-19 protocols. In case of any compulsion to offer the prayers inside mosques, then all windows and doors should be kept open for ventilation and minimize the chances of disease spread,` it stated.

• Nato`s 30 allies signed an accession protocol for Finland and Sweden on July 5, 2022, allowing them to join the nuclear armed alliance once parliaments ratify the decision, the most significant expansion of the alliance since the 1990s.
• The signing at Nato headquarters follows a deal with Turkey at last week`s Nato summit in Madrid, where Ankara lifted its veto on the Nordic membership bids following assurances that both countries would do more to fight terrorism.
• `This is truly an historic moment,` Nato Secretary General Jens Stoltenberg said alongside the foreign ministers of the two countries. `With 32 nations around the table, we will be even stronger 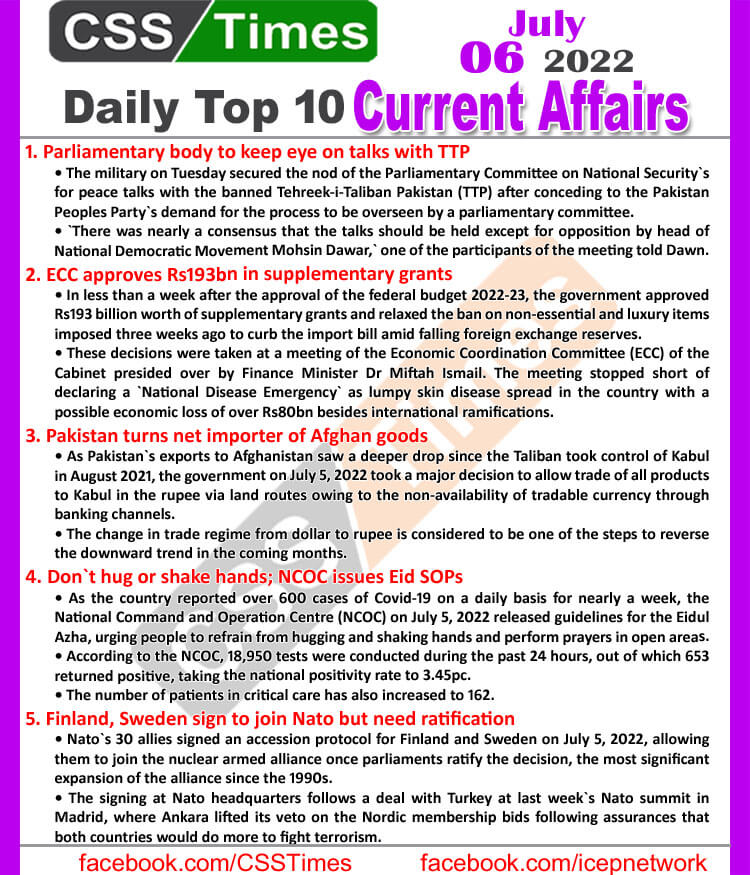