1. `9m poor families` of Punjab to get free electricity

• Punjab Chief Minister Hamza Shehbaz announced free electricity for households consuming up to 100 units, from July.
• The relief programme is supposed to benefit, as claimed by the government, an estimated nine million poor families about half of the population of the province.
• `I was told not to take big decisions without a cabinet to steer under-developed areas out of difficult economic conditions. It could become a NAB (National Accountability Bureau) case, but I said I am ready to face any difficulty to provide relief to the people, the chief minister told a press conference on July 4, 2022.
• The announcement comes in the wake of a ban imposed by the Election Commission of Pakistan on initiating any development project until the July 17 by-polls on 20 Punjab Assembly seats

• At least 10 security personnel were injured, three of them seriously, when a suicide bomber attacked a convoy of security forces in North Waziristan tribal district on July 4, 2022.
• Officials said the convoy was going from Mirali to Miramshah, the district headquarters, when a suicide bomber riding a motorcycle blew himself up near one of the vehicles. The attack was carried out near Khadi market in Mirali.
• Deputy Commissioner Shahid Ali Khan confirmed the suicide attack on the convoy, saying 10 security personnel were wounded.
• Earlier, a police official said 15 personnel were injured in the attack

• The Khyber Pakhtunkhwa cabinet on Friday authorised Chief Minister Mahmood Khan to sign the memorandum of understanding (MoU) regarding the fiscal responsibility of the federal and provincial government required under the economic bailout agreement with the International Monetary Fund.
• The cabinet met with the chief minister in the chair and ministers and administrative secretaries in attendance.
• The federal government has agreed in the Memorandum of Economic and Fiscal Policies signed with the IMF recently to present a MoU signed by provincial governments to jointly provide around Rs750 billion cash surplus to the centre

• In a historic move, the Sindh Assembly on July 4, 2022 unanimously passed a law fixing half per cent quota for transgender persons at public sector institutions in the province.
• Presenting `The Sindh Civil Servants (Amendment) Bill2021`, Parliamentary Affairs Minister Mukesh Kumar Chawla said that after the enactment of the law, Sindh would be first province to give jobs to transgender persons.
• `At this stage, it`s just a beginning as only 0.5 per cent quota has been fixed for transgender persons. We will ensure this quota is implemented not only in the government sector but also in the private sector,` he added

• An online educational series has been launched to educate Pakistani social media users about ways they can make their digital experience better. The plot of the series, titled Chai Chats, revolves around five university friends who encounter difficult situations online that they are able to overcome through grace, friendship and humour.
• The characters inspire and persuade each other to adopt responsible online behaviour.
• Meta, the operator of Facebook, Instagram and WhatsApp, has created the series in collaboration with the Pakistan Telecommunication Authority (PTA) 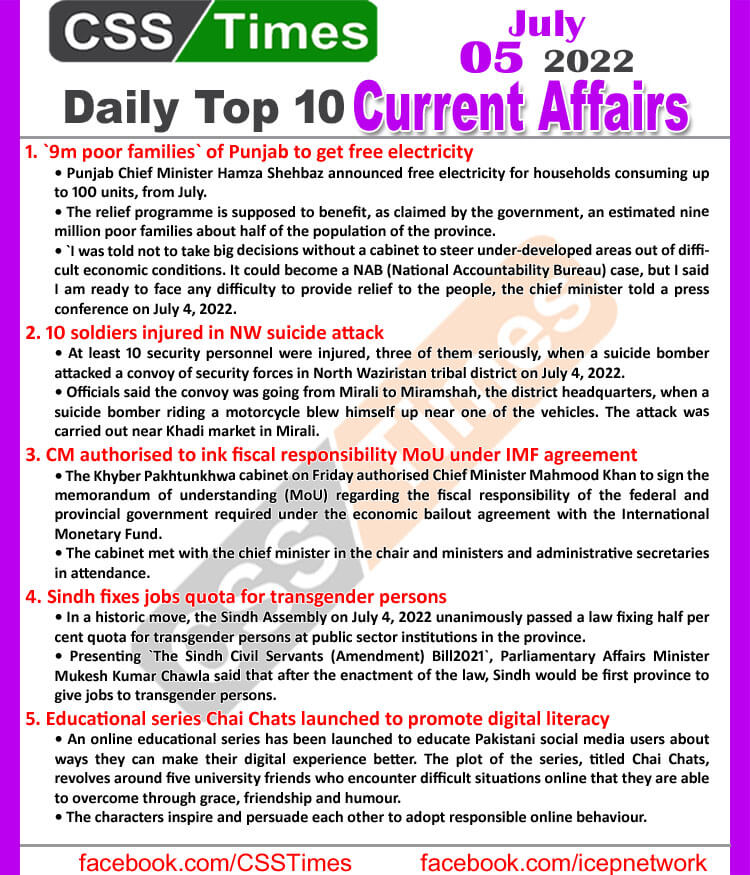