• With many still marooned in flood-affected regions of Khyber Pakhtunkhwa and a significant number of people airlifted to safety on August 28, 2022, the prime minister and the army chief made an attempt to bring a healing touch for a nation in grief.
• Shehbaz Sharif announced a grant of Rs10 billion for Balochistan to cope with the destruction caused by floods and Gen Qamar Javed Bajwa spent the day with troops carrying out relief operations in Sindh.
• The premier announced the relief package during a day-long trip to the flood-hit areas of Nasirabad division, including Haji Allah Dine village where he interacted with the affected people and assured them that the government would help rehabilitate all the flood victims.

• The executive board of the International Monetary Fund (IMF) meets on August 29, 2022 (today) to consider a bailout package for Pakistan as Islamabad claims tying up at least $37 billion in loans and investments.
• If the board approves the deal, the IMF will immediately disburse about $1.2 billion to Pakistan and may provide up to $4 billion over the remainder of the current fiscal year, which began on July 1.
• `The board is likely to approve the disbursement of the 8th and 9th tranche (over $1.2 billion) on Monday,` an IMF source told Dawn. `Not doing so will send a negative signal, particularly during the floods.
• Pakistan, he said, could also request emergency help from the IMF`s Rapid Financing Instrument (RFI), which may bring additional funds of up to $500 million

• The Taliban`s acting defence minister accused Pakistan on August 28, 2022 of allowing American drones to use its airspace to access Afghanistan, a charge Pakistan has recently denied following a US air strike in Kabul.
• Acting defence minister Mullah Mohammad Yaqoob said at a news conference in Kabul that American drones had been entering Afghanistan via Pakistan.
• `According to our information, the drones are entering through Pakistan to Afghanistan, they use Pakistan`s airspace, we ask Pakistan, don`t use your airspace against us,` he said.
• Pakistan`s foreign office released a statement saying it noted Yaqoob`s comments with `deep concern`.

• The Pakistan Railways (PR) will receive 46 coaches, of 230, from China in December. The coaches will have the capacity to run at the train`s speed of 160 kilometres per hour.
• PR teams are in China for the inspection of the prototypes of the coaches as well as the modern high-capacity wagons (goods/ freight wagons) and to receive training on manufacturing of such rolling stock.
• An official source in the department said the first batch of high-capacity freight wagons would also be ready by January or so as their prototypes are not ready

• The Khyber Pakhtunkhwa government has approved Rs2.5 billion funds for relief and rehabilitation activities in the flood-hit areas of the province.
• In this regard, a summary has been approved by the provincial cabinet.
• Besides, a letter has also been sent by establishment and administration department to relief and rehabilitation department to ensure implementation of the decision and furnish report to this end.
• In a statement issued here on August 28, 2022, Chief Minister Mahmood Khan termed provision of immediate relief to the flood victims and their rehabilitation top priority of government. He said that government would leave no stone unturned to provide relief to the flood victims 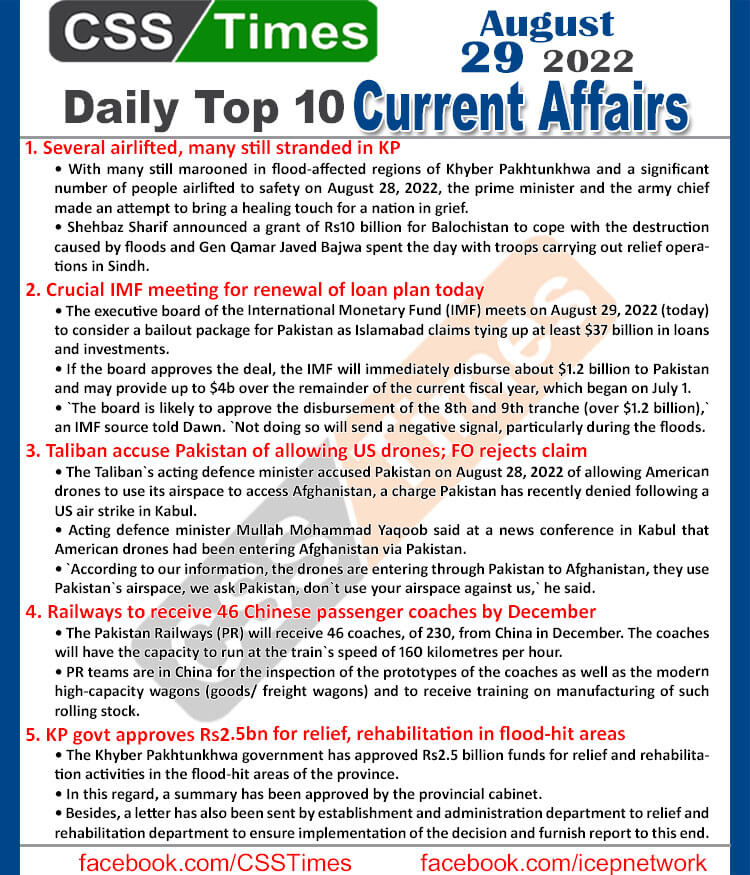