• As floods continue to devastate the length and breadth of the country resulting in the death of at least 42 more people in Khyber Pakhtunkhwa and prompting emergency in several districts, the government decided to deploy the army in all provinces to help the civilian authorities in rescue operations in the calamity-hit areas.
• At present, more than half of Pakistan is under water and millions of people have been rendered homeless as a result of flash flooding generated by abnormal monsoon rains which have entered their eighth spell with no signs of subsiding.
• A notification issued to this effect said that the exact number of troops and area of deployment will be worked out by the respective provincial governments in consultation with the military operations directorate and General Headquarters

• The United Nations will on Tuesday launch a $160 million Flash Appeal to help millions of people affected by unprecedented monsoon rains in Pakistan that triggered massive floods.
• Foreign Office spokesman Asim Iftikhar, at his weekly media briefing, said: “A UN Flash Appeal is going to be launched on Tuesday 30 August simultaneously from Geneva and Islamabad.” He said the UN flash appeal was very significant, and it would trigger the international community’s response as well as bilateral assistance from other countries.
• Separately, Prime Minister Shehbaz Sharif in his interaction with a group of envoys and diplomats on Friday said the government was reaching out to the friendly countries, donors and the international financial institutions for their continued cooperation at this difficult time.

• Inflation measured by the Sensitive Price Indicator (SPI) rose sharply during the week that ended on Aug 25, climbing to a record 44.6 per cent year-on-year, the Pakistan Bureau of Statistics data showed on August 26, 2022. The index rose mainly because of higher prices of essential food items mainly tomatoes, onions, pulses and cooking oil and fuel.
• Before this, the highest ever year-on-year increase in the SPI was 42.3pc, recorded for the week ending on Aug 18 and 38.63pc in the week ending on Aug 5.
• The latest data showed that the increase in the SPI was 1.83pc on a week-on-week basis. The highest week-on-week increase in the inflation indicator was recorded at 3.68pc for the week that ended on July 28

• Telephone and internet services in at least 10 districts of Balochistan were partially restored, hours after they were suspended due to the damage caused to the cable network.
• Meanwhile, the government has asked mobile telecom companies to enable consumers in the flood-hit areas in all the provinces to make calls, even with zero balance.
• According to the Pakistan Telecommunication Authority (PTA), Quetta, Ziarat, Khuzdar, Loralai, Pashin, Chaman, Panjgur, Zhob, Qila Saifullah and Qila Abdullah suffered a massive internet and telephone blackout on August 26, 2022 noon.
• The PTA said a serious damage to the cable and optical-fibre network due to torrential rains and flash floods caused the outages 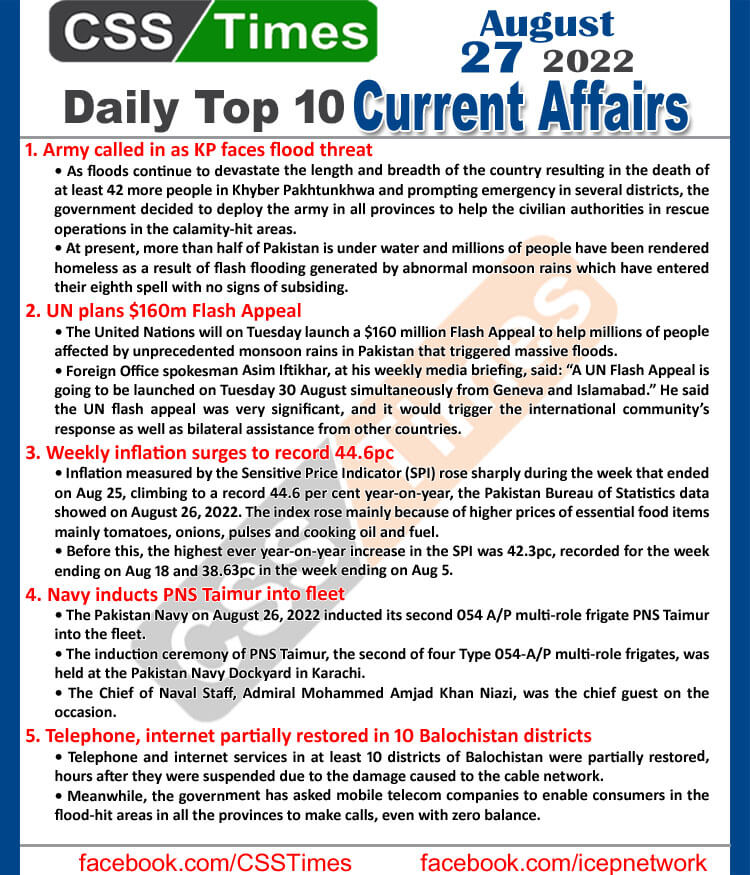