1. Pakistan declares emergency in the face of calamitous floods

• Calling the incessant monsoon rains a `climate-inducted humanitarian crisis of epic proportions`, the Pakistan government on August 25, 2022 officially declared a `national emergency` in light of the rain-induced floods which have so far killed 937 people, including 343 children, and left at least 30 million without shelter.
• As per the latest data compiled by the National Disaster Management Authority (NDMA), Sindh reported the highest number of deaths as 306 people lost their lives due to floods and rain-related incidents from June 14 to date.
• Balochistan reported 234 deaths whereas Khyber Pakhtunkhwa and Punjab recorded 185 and 165 deaths, respectively. In Azad Jammu and Kashmir, 37 people were killed while nine deaths were reported in the Gilgit-Baltistan region during the current monsoon rains. In the same period Islamabad reported one death

• The Saudi king has directed his government to invest $1 billion in Pakistan `in confirmation of the kingdom`s support of the Pakistani economy` and its people, a report from the Saudi Press Agency (SPA) said on August 25, 2022.
• The investment commitment was conveyed to Foreign Minister Bilawal Bhutto-Zardari during a phone call with his Saudi counterpart Prince Faisal bin Farhan.
• The directive from King Salman bin Abdulaziz came a day after the Qatari government said it would invest $3bn in Pakistan.
• Mr Bhutto-Zardari tweeted earlier on August 25, 2022 about the interaction with Prince Farhan and welcomed the investment commitment. He also said he had briefed his Saudi counterpart on the flood situation in Pakistan

• In what appeared to be among the most disastrous monsoon spells in six decades, Sindh and Balochistan are witnessing the heaviest rainfall since 1961, as the two provinces recorded 522 and 469 per cent, more than the normal downpour this year, respectively.
• The fresh numbers came from the Met Office, which surprised officials and attracted warnings from environmentalists, who called it the beginning of fresh challenges for the authorities as the much-hyped climate change had finally come knocking.
• `Sindh has received 680.5 millimetres of rain since July when the monsoon season actually began, said a Met official

• Chief Minister Chaudhry Parvez Elahi on August 25, 2022 set up the `Chief Minister Flood Relief Fund` and allocated Rs5bn for rehabilitation and resettlement of the flood victims of south Punjab.
• Talking to various parliamentarians, he said the entire machinery of the Punjab government was busy helping the flood affectees. `On my instructions, the chief secretary is also monitoring the rescue and relief operations in the affected areas,` he said.
• The CM added that he was grieved over the loss of life and property in Taunsa, DG Khan and Rajanpur areas. Saying that the Punjab government would arrange every available resource to help the flood-hit people, he urged the philanthropists to also come forward to help the people in need.
• Mr Elahi vowed to take every step to rehabilitate and resettle the victims

• As the country is reeling from the unprecedented devastation caused by floods and rains in KP, Balochistan, south Punjab and Sindh, assistance from international donors has started trickling in with the UN announcing on August 25, 2022 $3 million in aid for the flood hit people and the All-Pakistan Chinese Enterprises` Association announcing a donation of Rs15 million to the PM`s Flood Relief Fund.
• The UN Central Emergency Response Fund (CERF) allocated $3 million to UN agencies and partners in Pakistan to respond to floods.
• `The amount will be used for health, nutrition, food security, and water and sanitation services in flood affected areas, focusing on the most vulnerable,` the UN announced on Thursday 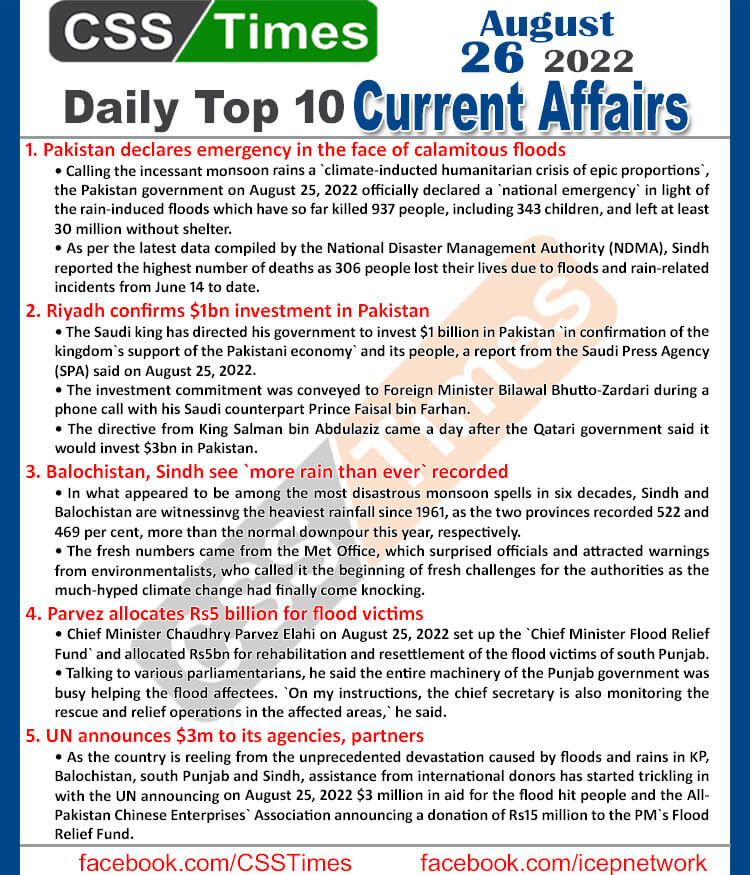