1. IMF money may arrive in Pakistan`s account by August-end

• The International Monetary Fund (IMF) has convened a meeting of its executive board on August 29 to approve a bailout package for Pakistan, including disbursement of about $1.18bn, before the close of current month.
• The move follows the completion of the $4 billion in bilateral financing from four friendly nations and would pave the way for an immediate disbursement, expected to be in Pakistan`s account before the end of working hours on August 31 Finance Minister Miftah Ismail told Dawn that a letter of intent (LOI) had been received early Friday from the lender for the revival of the programme under the staff level agreement (SLA) and memorandum of economic and fiscal policies (MEFP) signed last month.
• `We are going through the LOI, would sign and send [it back to the IMF anytime soon and look forward to (executive) board meeting later this month for approval,` he said.

• Pakistan and Turkiye have signed a preferential trade agreement (PTA) to boost trade in certain products between the two countries.
• Since the signing of a framework agreement on March 22, 2016, both sides have held 14 rounds of bilateral negotiations to identify those products for trade which are not affecting each other`s interests.
• The PTA will come into effect from January 1, 2023.
• The concessions will be offered in three phases immediately, up to five years and up to10 years.
• Turkish Trade Minister Dr Mehmet Mus and Minister for Commerce Naveed Qamar signed the agreement at a ceremony in the presence of Prime Minister Shehbaz Sharif

• Chief of Army Staff General Qamar Javed Bajwa on August 12, 2022 linked global peace with the impartiality of multilateral forums, collective defense of the common good and the supremacy of international law, as the head of the army became the first-ever Pakistani dignitary to be invited by the British monarch as a chief guest to the Royal Military Academy, Sandhurst.
• `In the interest of world peace, we must strive to preserve the vitality, relevance and internal sense of impartiality in multilateral institutions, maintain consensus on the collective defense of global commons and uphold the prestige of international law.
• `In case we fail to do that, I am afraid we may end up destroying the beautiful world that we have,` Gen Bajwa said while speaking at the Sovereign`s Parade for Commissioning Course 213

• The Balochistan Assembly on August 12, 2022 evening unanimously adopted a resolution that sought Muslim Bagh, a sub-division of Qila Saifullah, to be made a new district while some other lawmakers suggested dividing Quetta into four districts in view of its huge problems, triggered by a growing population.
• The resolution was moved in the Balochistan Assembly by parliamentary secretary on excise and taxation, Ms Shaheena Kakar of the Awami National Party (ANP).
• Deputy Speaker Sardar Babar Khan Musakaail presided over the session

• Newly appointed Water and Power Development Authority (Wapda) Chairman retired Lt Gen Sajjad Ghani assumed charge on August 12, 2022.
• The government issued a notification about his appointment on Thursday. Mr Ghani 23rd chairman of Wapda is a civil engineer and soldier as he has pursued two parallel career streams for the past four decades.
• He obtained Bachelor of Engineering degree from Military College of Engineering in 1984 and Master`s degree in civil engineering from University of Engineering and Technology, Lahore, in 1990 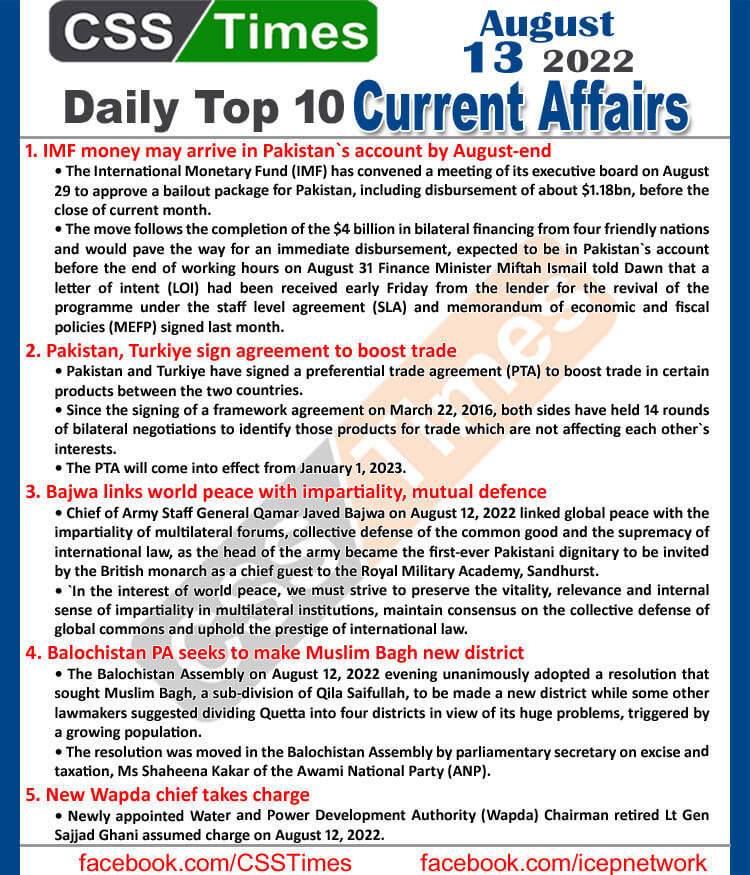