• The American drone that eliminated Al Qaeda leader Ayman al Zawahiri in Kabul was possibly launched from an airbase in Kyrgyzstan, some US media reports claimed on Wednesday.
• The reports claimed that the attack was launched from Ganci Airbase, a US transit facility at Manas in northern Kyrgyzstan.
• According to the US Department of Defence, Ganci is a former American military base in Kyrgyzstan, near the Bishkek international airport. It was operated by the US Air Force, which handed it over to the Kyrgyz military in June 2014

• The Japanese government will provide $9 million to Pakistan for upgrading the mechanical system for sewerage and drainage services in Multan.
• An agreement to this effect was signed on August 3, 2022.
• Ambassador of Japan Wada Mitsuhiro and Economic Affairs Division Secretary Mian Asad Hayaud Din signed the agreement on behalf of their respective countries in the presence of visiting Parliamentary Vice Minister for Foreign Affairs of Japan, Honda Taro.
• Minister for Economic Affairs Sardar Ayaz Sadiq and Chief Representative of Japan International Cooperation Agency (Jica) Kinoshita Yasumit su also attended the signing ceremony

3. A JK minister gets life imprisonment in murder case

• A sitting member of the Azad Jammu and Kashmir (AJK) cabinet was arrested by police on Wednesday moments after the Shariat Appellate bench of the AJK High Court slapped him with rigorous life imprisonment and Rs1 million fine in a nearly two decades old murder case.
• Minister for Higher Education Malik Zaffar Iqbal, who had returned from LA-8, Kotli-I on PTI ticket, was nominated in this case in an application lodged with Kotli police station on Sept 29, 2003by Rashid Hussain Shah for the murder of his brother Amir Asif Shah.
• The complainant had alleged that a group of around 16 lethal weapon wielding people, including Mr Iqbal, had attacked his shop in Riyan Gala village in the wake of a brief altercation with Mansha Malik a few days ago

4. SBP cracks down on exchange firms to stabilise rupee

• The State Bank of Pakistan (SBP) on August 3, 2022 said it has started a crackdown on exchange companies (ECs) in the light of findings from ongoing inspections and mystery shopping.
• In a statement, the central bank stated that due to recent volatility in the exchange rate and the difference between the interbank rate and the rate offered by ECs and banks to their customers, it has increased its monitoring of ECs and banks` foreign exchange operations.
• In this respect, the SBP started inspections of a number of exchange companies and banks on Monday (Aug 1), it added.
• There was clear evidence that banks were involved in mintingmoney as they were charging much higher dollar rates than the rates shown by the State Bank

• The rupee jumped 4.2 per cent in the interbank market against the US dollar on Wednesday, making the largest single day gain in years after weeks of battering amid political and economic turmoil.
• The rupee closed at 228.80 on Wednesday, up from 238.38 a day earlier, the State Bank of Pakistan (SBP) said, a day after the International Monetary Fund (IMF) said the country had cleared all prior actions needed to unlock the much-needed loan programme.
• Fahad Rauf, head of research at Ismail Iqbal Securities, t old Reuters news agency that it was the highest rupee rally in both absolute and percentage terms since1999,accordingtocentral bank data 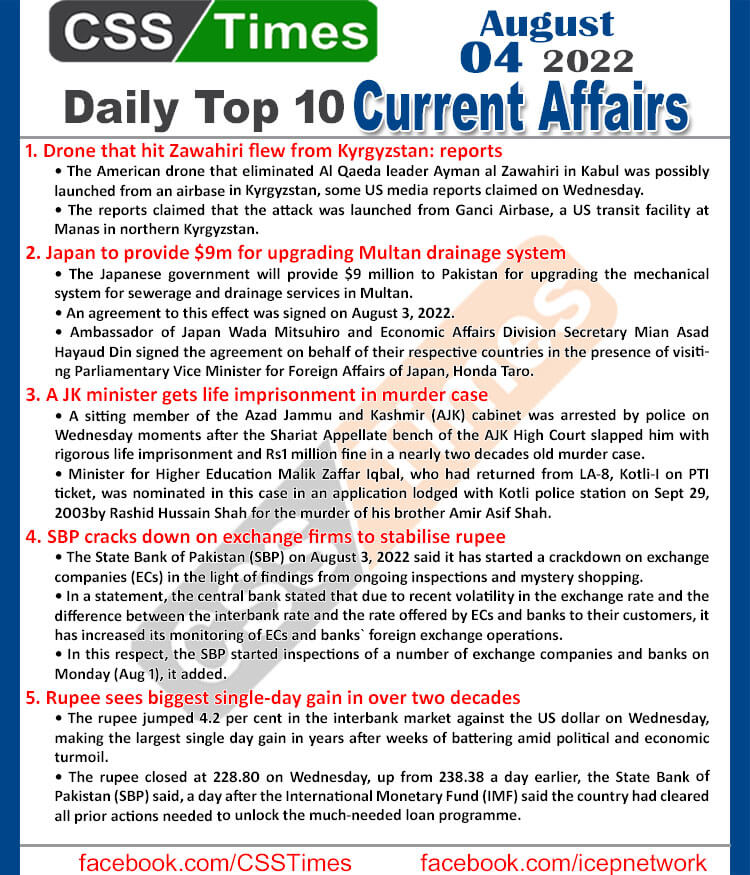 Engineering in renewable energies, the profession with the most future